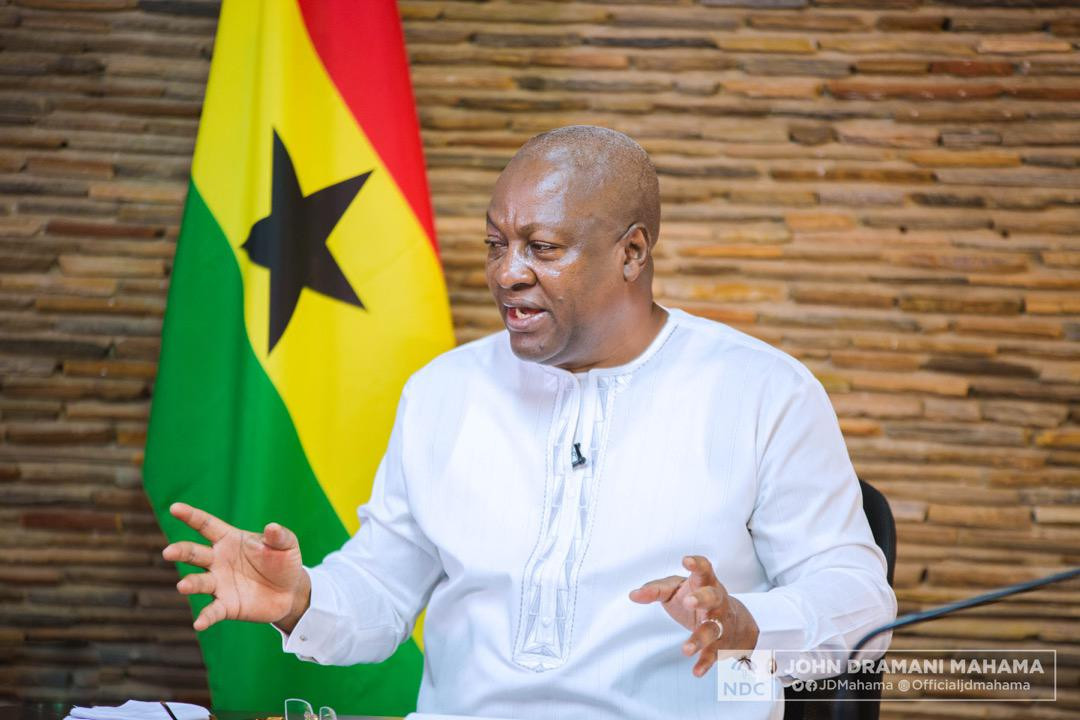 Former President John Dramani Mahama has broken his silence on the Airbus scandal by dismissing allegations of wrongdoing in the purchase of the two aircraft for the Ghana Armed Forces.

He has also denied benefiting from the deal financially.

Speaking in an exclusive interview with the Daily Graphic in Accra yesterday, Mr Mahama declared: “Let me state without any equivocation that no financial benefit accrued to me. Neither was there any form of inducement in the purchase of the aircraft. My singular motivation was to equip and retool the Ghana Armed Forces in a manner that would make the discharge of their national and international roles efficient and less burdensome and for all the sacrifices that our men and women in uniform make, they do not deserve less”.

“I am happy that the said aircraft have become the backbone of the Ghana Air Force and its operations. They are used for troop transportation, logistics deployment and medical evacuation,” he stated.

He said he felt fulfilled that as Vice-President and later as President and Commander-in-Chief of the Ghana Armed Forces, his “overarching desire to ensure that our men and women in uniform were provided with the tools and equipment they needed to fulfil their constitutional mandate of ensuring public safety, security and protecting the territorial integrity of our nation were reasonably met”.

“I am proud that under my tenure as Chairman of the Armed Forces Council and as Commander-in-Chief, the security services saw the biggest retooling and equipping in the history of Ghana.”

The said aircraft were purchased for the military when Mr Mahama was the Vice-President and Chairman of both the Armed Forces Council and the Police Council.

Giving a background for the purchase of the two aircraft, Mr Mahama said as Vice-President between January 7, 2009 and July 24, 2012, he was assigned responsibility for the Ghana Armed Forces Council and the Police Council by the then President John Evans Atta Mills, who retained the Chairmanship of the National Security Council.

Mr Mahama explained that at the time of the acquisition of the aircraft and other equipment, Ghana’s security services required retooling.

“The Police Service had an ageing fleet of Peugeot and Mahindra vehicles, the Ghana Navy had no vessel with which to patrol our coastal waters, the Ghana Air Force had only one functional 37-year-old F27 aircraft, which was still flying, only because of the ingenuity of our aeronautical engineers,” he said.

Mr Mahama said the Infantry Brigade of the Ghana Army relied on old Dongfeng trucks and a fleet of smoking pick-up vehicles, the Prisons Service, the Ghana Immigration Service, and the National Security Council Secretariat were virtually immobile due to lack of equipment.”

“All the processes and negotiations by the government in the acquisition of the aircraft were conducted directly with Airbus and my administration without any untoward influence either directly or indirectly through any agents it may have appointed. Indeed, nowhere in the available UK Court Documents has it been said that Airbus paid any public or government official on the side for the purchase of the aircraft,” he stated.

Mr Mahama said all decisions for the acquisition were conducted by a very competent team at the military headquarters.

“Some of our gallant and highly efficient officers who composed the technical team are still in active service in the military and I reject any idea that they have arrived at their decisions through inducement or coercion by any person,” Mr Mahama said.

Mr Mahama said a plan to re-equip the Ghana Armed Forces and the Ghana Police Service was submitted to, and approved by then President Mills.

Former President Mahama indicated that at the time he took office as Vice-President in 2009, the military was already considering the acquisition of two C27J aircraft, but the quoted price, (above $40 million per unit) was considered high.

“Eventually, the military settled on two C295 aircraft at a cost of about $24 million each, bringing the cost of the two aircraft to about $48 million,” he emphasized.

Former President Mahama explained that the Airbus matter was an issue between the Airbus company and its representatives who were found to be in breach of the Organisation for Economic Co-operation and Development (OECD) rules.

“This is clearly and unambiguously stated in all the available documents of the UK Serious Fraud Office (SFO). It has nothing to do with the government of Ghana or with any official of government. To state otherwise is to misrepresent the conclusions of the SFO report and spread deliberate falsehood.

Asked why he did not comment on the issue at the time the news broke, Mr Mahama said he had been reluctant to personally comment on the various allegations made in respect of the acquisition of the aircraft except for the official reactions of his staff and former government officials.

“I recognised that it was the subject of an ongoing investigation by the Office of the Special Prosecutor in Ghana, following the almost immediate referral to that body by the President,” he said.

When asked if the Office of the Special Prosecutor had reached out to him on its investigations, he answered in the negative.

He said recent events, however, had brought him to the realisation that President Nana Addo Dankwa Akufo-Addo and his administration were not interested in the issue as a matter of good faith, but rather they were determined to use it to further their political interests.

Mr Mahama served notice that since the NPP had made the issue of corruption a major item of debate in the lead-up to the 2020 elections, he had accepted the challenge.

“I intend to address all the allegations of corruption made against me over the years, and I will also take on fully, Nana Akufo-Addo on his own record of corruption,” he stated.